Why don’t Indian Muslims react to aggressive Hindutva politics? Are they terrified? Or, is it a strategic calm?

The rejuvenated post-2014 Hindutva politics has transformed every aspect of social and cultural life of Muslims in India into an unsolvable contestation.

Their eating habits are anti-Hindu or anti-national; Muslim men don’t “love’’, they indulge in love-jihad with Hindu girls; Muslim couples have sex only to increase their population and outnumber Hindus; and, Muslims offer namaz on roads to convert public (read Hindu) lands into mosques and so on. This propaganda is followed by actual violence against Muslims.

But Muslims are not launching any anti-Hindutva counter mobilisation. Religious organisations, Muslim pressure groups and even politicians are not calling for mass protests. The simplistic, but problematic, inference is that Muslims are silent to avoid any confrontation.

Three counter questions may be asked about the anxiety over ‘Muslim silence’: (a) Has Muslim political attitude changed toward so-called ‘Muslim issues’? (b) Do Muslims think differently from other communities in India? (c) are Muslims following any well-defined strategy to counter Hindutva?

Has Muslim attitude changed?
Muslim political attitude is often reduced to one that is aimed at protecting a few identity-based issues: Urdu, the minority status of Aligarh Muslim University (and now Jamia Islamia University), personal law/shariat and Babri Masjid. This narrowly defined imagination of Muslim politics is nurtured, protected and reproduced by political parties.

The so-called secular parties and Muslim political elites, who claim to represent Muslims, exaggerate this identity-based victimhood. Even the Sachar Commission Report, which factually demonstrates Muslim backwardness, has been presented as a symbol of political victimhood.

On the contrary, BJP uses the Muslim identity as an “other” to cultivate its Hindutva vote bank. Unlike the previous NDA government, the Modi-led BJP deliberately and directly demolishes “Muslim issues”. A radical Muslim reaction would give the government an opportunity to posture as a truly nationalist establishment.

However, the triple talaq issue could not create the Shah Bano type hype primarily because the Hanafi Muslims in north India oppose this practice. Even the All Indian Muslim Personal Law Board failed to mobilise public opinion. The abolition of Haj subsidy remained a non-issue. The violent cow politics also failed because beef is an insignificant aspect among Muslims in India.

The Babri Masjid issue is a relevant example to understand this “Muslim silence” phenomenon. The CSDS-Lokniti surveys show Muslims’ opinion about the Babri mosque has changed quite considerably over time. In 2009, around 80 per cent Muslims said that the mosque demolition was an unjustified act. This feeling of injustice increased in 2015 to 86 per cent. (Table 1)

There are diverse Muslim opinions on the question of rebuilding the mosque. In 2009, 44 per cent Muslims claimed that only a mosque should be built on the site, while 25 per cent called for a Ram temple and Babri Masjid side by side.

The Muslim opinion in favour of the ‘mosque with temple’ consolidated in 2015 (Table 2). This is why many Muslims say the issue must be resolved by the Supreme Court, though the possibility of negotiated settlement outside the court is also seen as a strong possibility (Table 3).

Does it mean that Babri Masjid still survives as an important ‘Muslim issue’? During the 2016 UP assembly elections, 32 per cent Muslims argued it was not (one fourth respondents decided not to answer this question! See, Table 4). Babri Masjid, like other identity-centric Muslim issues, has lost its provocative capability for Muslims. 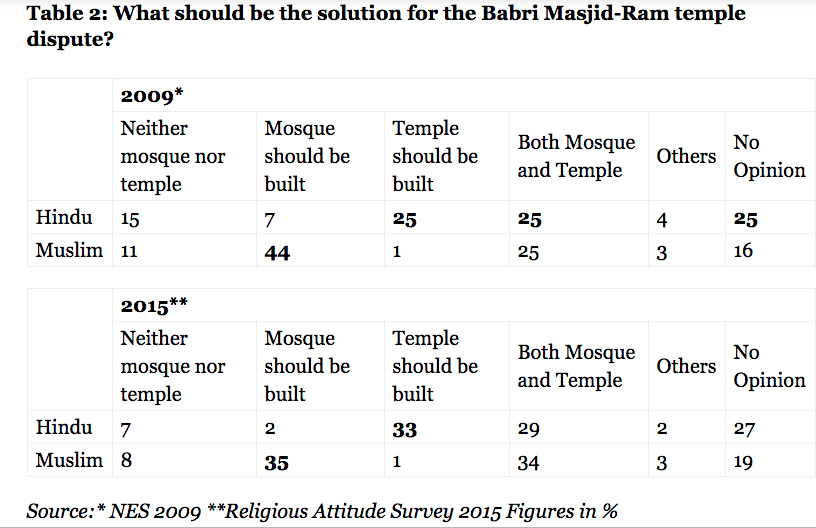 Do Muslims think differently?
We must also study Muslim opinion in relation to so-called ‘national sentiments’.

The CSDS- Lokniti’s recent Mood of the Nation Survey finds that the popularity of the BJP-led NDA government is declining and that it should not be given another chance. Muslim respondents also share this view and do not deviate from the national sentiment. 47 per cent respondents argue that Modi government is not good for the country.

Muslims also assert that India needs a better government that could provide a positive direction (Table 6). The Muslim assertion against Modi government — like those of the non-Muslim respondents — is also linked to the climate of hate against all marginalised groups (Table 7). More than half of the respondents say that they are dissatisfied with the way miscreants like the gau-rakshaks are treated by the government. 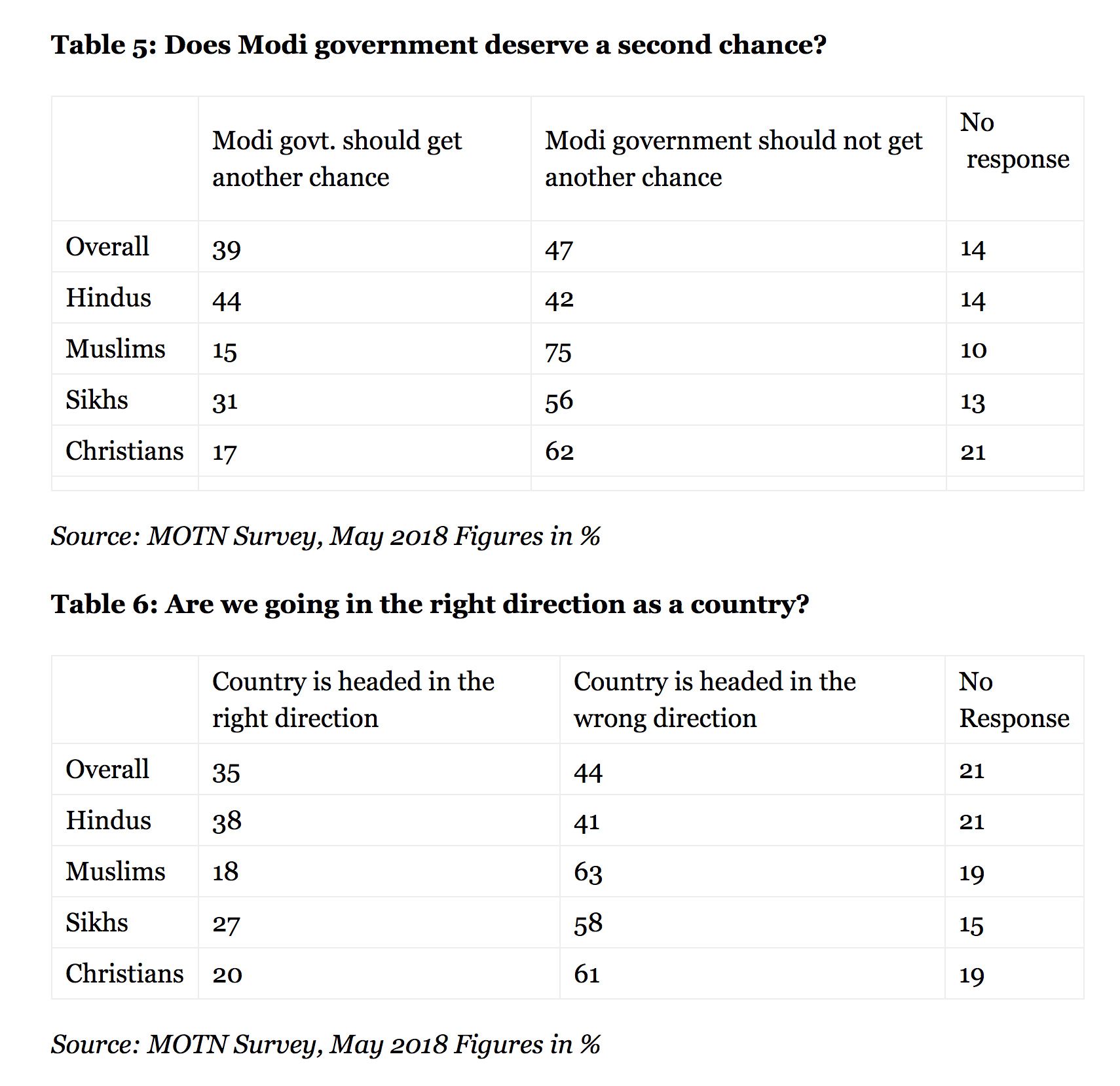 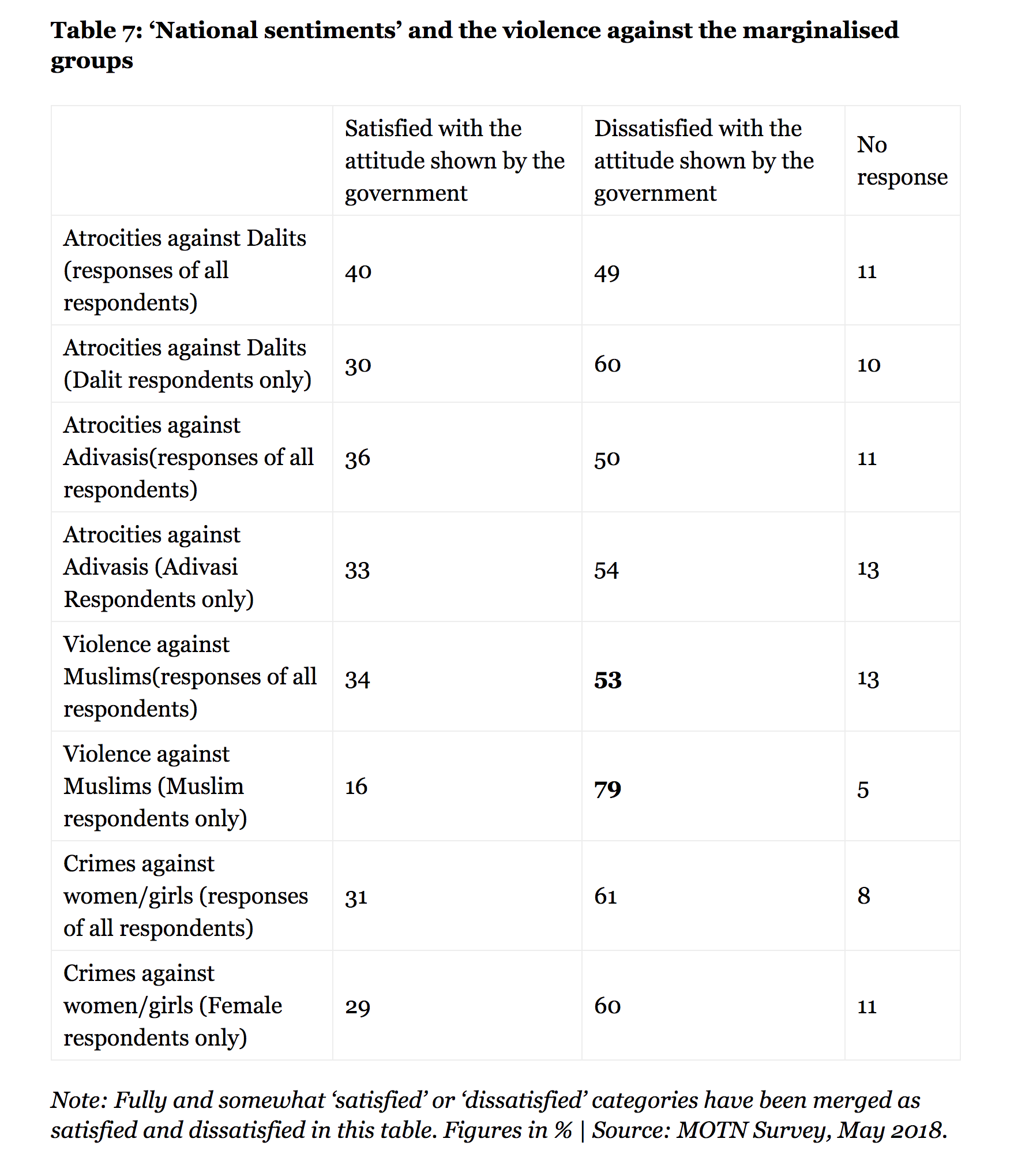 Do Muslims follow a well-defined strategy?
The question of ‘Muslim reaction’ must be seen in the context of the demographic plurality of Indian Muslims. This ‘Muslim community’ in India consists of different languages, regions and varieties of Islam. Speculation over a ‘defined strategy’ to counter Hindutva appears unreasonable and vague.

The ‘Muslim silence’ points to the intellectual weakness of the political class. Neither the BJP nor the other parties have produced any constructive and positive program of action for Muslims.

The political class must realise that Muslim aspirations cannot be reduced only to the so-called ‘Muslim issues’. Muslims, like any other community, are more concerned about poverty, employment and education. Threat to religious identity, no doubt, affects them psychologically; but the prevalent imaginations of Muslim-ness do not entirely determine their aspirations as citizens.

The Muslim elites have not yet identified a legitimate language to counter Hindutva. The secular vs communal binary is not satisfactory any longer. It also has something to do with changing religiosity especially among Sunnis and the Tablighi Jamaat position that work on deen is more important than politics.