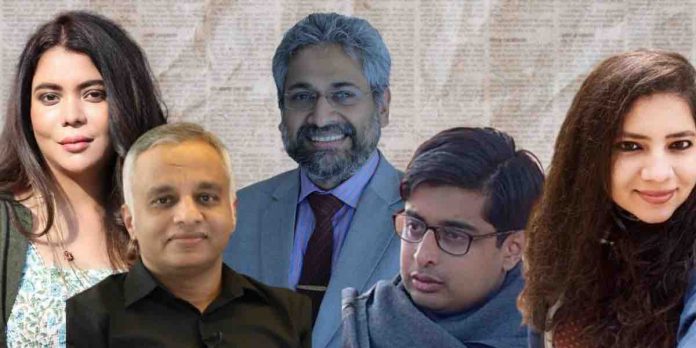 Over the past few days, The Wire – in collaboration with 16 other media organisations – has been revealing the names of people who were either persons of interest or forensically identified as having been targeted by clients of the NSO Group’s Pegasus spyware.

Those on the list include heads of state, political figures, activists, students, lawyers and journalists, among others.

The France-based media non-profit organisation Forbidden Stories had accessed a leaked database of 50,000 numbers who may have been targeted for surveillance by clients of NSO Group. Since the Israeli company says that the advanced spyware is only sold to “vetted governments”, it is safe to assume that these individuals were targets or potential targets of government or military agencies.

The news organisations working on Pegasus Project were independently able to identify the owners of over 1,500 numbers across at least 10 countries. A small cross-section of these phones was forensically examined to find traces of Pegasus.

Amnesty International, in collaboration with The Wire, was able to forensically examine the phones of 10 Indians, all of which showed signs of either an attempted hack or a successful compromise.

To be sure, the presence of a number in the database does not imply that the person’s device was successfully targeted. Unless evidence is established through a forensic examination, it is impossible to say if there was an attempted or successful hack. Therefore, an important distinction has been made to differentiate the names that appear on the list. A potential target is someone whose number appears on the list, but whose device has not been forensically analysed by Amnesty. A person is classified as a target if their phones show evidence of an attempted or successful hack.

Until now, spread across several stories – all of which can be found here – The Wire has revealed the names of 115 people who were targets or potential targets for surveillance by clients of the NSO Group. All of them are listed below. Names that have been revealed by Pegasus Project partners but not by The Wire have not been included here.

Note: The list will be updated as The Wire publishes new stories.

The Wire has confirmed the numbers of at least 40 journalists who were either targets or potential targets for surveillance. Forensic analysis was conducted on the phones of seven journalists, of which five showed traces of a successful infection by Pegasus. [Read more: Snoop List Has 40 Indian Journalists, Forensic Tests Confirm Presence of Pegasus Spyware on Some]

1. M.K. Venu: A founding editor of The Wire. His phone was also forensically analysed and traces of Pegasus were found.

2. Sushant Singh: Former Indian Express journalist who writes on national security. After a forensic analysis of his phone, Amnesty arrived at the conclusion that it had been compromised.

3. Siddharth Varadarajan: A founding editor of The Wire, his phone was forensically analysed. The analysis showed that the phone was compromised by Pegasus.

4. Paranjoy Guha Thakurta: Former EPW editor, who no writes for Newsclick. His phone was compromised by Pegasus, forensic analysis revealed.

5. S.N.M. Abdi: Former Outlook journalist, whose phone was compromised according to forensic analysis.

6. Vijaita Singh: The Hindu journalist who covers the home ministry. Forensic analysis of her phone showed evidence of an attempted hack, but no evidence of a successful compromise.

7. Smita Sharma: Former TV18 anchor. Forensic analysis found evidence of an attempted hack but nothing to indicate that her phone was successfully infected.

9. Rohini Singh: Freelance journalist who has written several exposes for The Wire about controversial business dealings of politicians or their family members.

12. Prem Shankar Jha: A veteran journalist who held editorial positions at Hindustan Times, the Times of India and several other newspapers. He is a regular contributor to The Wire.

13. Swati Chaturvedi: Freelance journalist who has contributed to The Wire. She wrote a book about the infamous BJP IT Cell.

15. Aurangzeb Naqshbandi: A political reporter who formerly worked for Hindustan Times and covered the Congress party.

16. Ritika Chopra: A journalist for the Indian Express who covers the education and Election Commission beats.

18. Sandeep Unnithan: India Today journalist who reports on defence and the Indian military.

19. Manoj Gupta: Editor of investigations and security affairs at TV18.

20. J. Gopikrishnan: An investigative reporter with The Pioneer, he broke the 2G telecom scam.

25. Jaspal Singh Heran: An octogenarian who is the editor-in-chief of the Ludhiana-based Punjabi daily Rozana Pehredar.

26. Roopesh Kumar Singh: A freelance based in Jharkhand’s Ramgarh.

Politicians, political figures or individual linked to them

1. Rahul Gandhi: The Congress party leader who was presumed prime ministerial candidate for the past two general elections.

3. Sachin Rao: Another aide of Rahul Gandhi who is a member of the Congress Working Committee.

[Read more: Rahul Gandhi Selected as Potential Spyware Target in Run Up to 2019 Polls and After]

4. Prashant Kishor: An election strategist who has worked for several political parties, including the BJP and the Congress. His phone was forensically analysed and showed signs of a successful hack.

6. Ashwini Vaishnaw: A former IAS officer who was made a Union cabinet minister in the recent expansion.

10. Sanjay Kachroo: A corporate executive who was chosen by then human resource development minister Smriti Irani as her officer on special duty in 2014, but was never formally appointed. Listed along with his father and minor son.

11. G. Parameshwara: Deputy chief minister in the JD(S)-Congress coalition government in Karnataka, which was toppled after several MLAs defected to the BJP.

12: Satish: Personal secretary to H.D. Kumaraswamy, who was chief minister of Karnataka.

13. Venkatesh: Personal secretary to Siddaramaiah, who was the Congress chief minister of Karnataka before Kumaraswamy.

1. Ashok Lavasa: A career bureaucrat, he was a potential target of surveillance when he was an election commissioner.

1. Hany Babu M.T.: Professor at Delhi University who is an accused in the Elgar Parishad case.

2. Rona Wilson: A prisoners’ rights activist who is another accused in the Elgar Parishad case.

3. Vernon Gonsalves: A rights activist. He is also accused in the ELgar Parishad case.

4. Anand Teltumbde: An academic and civil liberties activist who is accused in the Elgar Parishad case.

5. Shoma Sen: Retired professor and one of the accused in the Elgar Parishad case.

6. Gautam Navlkha: A journalist and rights activist who is accused in the Elgar Parishad case.

7. Arun Ferreira: A lawyer who is also accused in the Elgar Parishad case.

8. Sudha Bhardwaj: Activist and lawyer and accused in the Elgar Parishad case.

9. K. Pavana: The daughter of Telugu poet Varavara Rao, who is accused in the Elgar Parishad case.

10. Minal Gadling: The wife of lawyer Surendra Gadling, who is accused in the Elgar Parishad case.

11. Nihalsing Rathod: A lawyer and associate of Surendra Gadling.

12. Jagadish Meshram: Another lawyer who is associated with Surendra Gadling.

13. Maruti Kurwatkar: An accused in several cases under the Unlawful Activities (Prevention) Act. He was represented by Surendra Gadling.

14. Shalini Gera: A lawyer who has represented Sudha Bharadwaj.

16. Jaison Cooper: Kerala-based rights activist who is a friend of Anand Teltumbde.

18. Lalsu Nagoti: A lawyer who is a close associate of Mahesh Raut, who is accused in the Elgar Parishad case.

19. Soni Sori: Tribal rights activist who is based in Bastar.

20. Lingaram Kodopi: A journalist and the nephew of Soni Sori.

21. Degree Prasad Chouhan: An anti-caste activist who is the Chhattisgarh state president of the People’s Union for Civil Liberties.

22. Rakesh Ranjan: An assistant professor at the Sri Ram College of Commerce.

23. Ashok Bharti: Chairman of the All India Ambedkar Mahasabha, an umbrella association of Dalit rights’ groups.

24. Umar Khalid: Former student of Jawaharlal Nehru University (JNU). He was first arrested on sedition charges during the infamous JNU sloganeering case. He is now in jail, awaiting trial as an accused in the Delhi riots conspiracy case.

25. Anirban Bhattacharya: Another former JNU student who was arrested along with Khalid on sedition charges.

27. Bela Bhatia: A lawyer and human rights activist based in Chhattisgarh.

30. Alok Shukla: An anti-coal mining activist and convenor of the Chhattisgarh Bachao Andolan.

37. S.A.R. Geelani: Delhi University professor who was convicted and later acquitted in the parliament bombing case. His phone was forensically analysed and showed signs of an infection by Pegasus.

38. G. Haragopal: A retired professor who taught at the University of Hyderabad. He was chairman of Saibaba Defence Committee. Three of his phones were forensically analysed and the results were inconclusive.

39. Vasantha Kumari: The wife of former Delhi University professor G.N. Saibaba, who was convicted for links with a banned Maoist organisation.

40. Rakesh Ranjan: An assistant professor at Delhi University. He was a supporter of the Saibaba Defence Committee.

41. Jagdeep Chhokar: Co-founder of the watchdog Association for Democratic Reforms.

1. A former Supreme Court staffer: The woman had accused then chief justice of India Ranjan Gogoi of sexual harassment. Several members of her family were also potential targets for surveillance.

Figures from the Northeast

1. Samujjal Bhattacharjee: An advisor to the All Assam Students Union and member of the high level committee to look into the implementation of Clause Six of the Assam Accord.

2. Anup Chetia: A leader of the United Liberation Front of Assam.

3. Malem Ningthouja: A Delhi-based writer who is from Manipur.

1. Atem Vashum: A leader of the National Socialist Council of Nagalim (NSCN-Isak Muivah) who is assumed to be the successor to the group’s chairman Th. Muivah.

3. Anthony Shimray: The commander in chief of the Naga Army of NSCN (I-M).

5. Kitovi Zhimomi: Convenor of the Naga National Political Groups (NNPGs). The Narendra Modi government was in parleys with the groups to find ‘one solution’ to the Naga issue.

Scientists or those involved in the health sector

1. Gagandeep Kang: One of India’s foremost virologists who was involved in the fight against the Nipah virus.

2. Hari Menon: The Indian head of the Bill and Melinda Gates Foundation.

1. Andres Manuel Lopez Obrador: He is now the president of Mexico, but was targeted before his election in 2018. Several of his aides were also targeted.

2. Emmanuel Macron: The president of France.

6. Barham Salih: The president of Iraq.

12. Charles Michel: Former prime minister of Belgium who is currently the president of the European Council.

Jamal Khashoggi was a Saudi dissident who wrote for the Washington Post. He was murdered in the Saudi embassy in Turkey by assassins who were allegedly sent by the Saudi government. Several people who were associated with him or the investigation into his deaths were targets or potential targets for surveillance.

1. Hatice Cengiz: A Turkish doctorate student who was engaged to Jamal Khashoggi. Her phone was analysed forensically.

2. Hanan Elatr: She was married to Khashoggi. Her phone was also forensically analysed.

4. Turan Kislakci: A Turkish journalist who introduced Khashoggi to Cengiz.

5. Irfan Fidan: The Turkish chief prosecutor in charge of investigations into Khashoggi’s murder.

1. Sheikha Latifa: A member of the Dubai royal family and the daughter of UAE’s prime minister Sheikh Mohammed bin Rashid al-Maktoum. When she attempted to flee her father’s custody, she was captured by Indian forces near Goa and sent back to Dubai.

The Pegasus Project is a collaborative investigation that involves more than 80 journalists from 17 news organisations in 10 countries coordinated by Forbidden Stories with the technical support of Amnesty International’s Security Lab. Read all our coverage here.

‘Democracy Has Plunged to a New Low’: Gandhi Peace Foundation on...