Prime Minister Narendra Modi on Tuesday declared that his government had saved over Rs 90,000 crore of public money that was siphoned off regularly under previous governments.

“We have put an end to loot of public money (which was the case) during the previous governments by middlemen. We have busted more than six crore fake ration cards, LPG connections and bogus pensions,” Modi was quoted as saying at a rally in Balangir, Odisha.

Since the Centre has put the illegal interests of some people in jeopardy, they are now joining hands to remove the country’s “chowkidar” (watchman) by leveling false allegations against me, the prime minister added.

What Modi is referring to is the Centre’s direct benefit transfer (DBT) programme, a project that is retooling India’s welfare system to target beneficiaries more accurately.

However, there are three broad problems with the prime minister’s statement and other claims made by his government with regard to DBT and Aadhaar-related savings.

The first is that while the DBT programme indeed rapidly expanded after 2014 under the Modi government, it actually started in January 2013 under the previous UPA-II government.

Much of the infrastructure that underpins the ‘new’ welfare system like Aadhaar – which in turn lays the groundwork for the NDA-II’s JAM (JanDhan-Aadhaar-Mobile) agenda – was also started under a Congress-led administration.

So claiming that ‘illegal interests’ are out to get the prime minister because he is continuing a programme started under a previous government is a little far-fetched.
 

Secondly, the far bigger factual error is the ‘Rs 90,000 crore’ figure. While it is unclear how much has been saved, it is likely a lot less than Rs 90,000 crore.

This statistic is often used by senior government ministers, usually in the context of Aadhaar-related savings, and has been hotly contested by civil society stakeholders, human rights activists and in some sectors, even the Comptroller Auditor General.

In fact, as the government’s dashboard shows, the majority of this Rs 90,000 crore comes from three welfare schemes: PAHAL, PDS and MGNREGS. 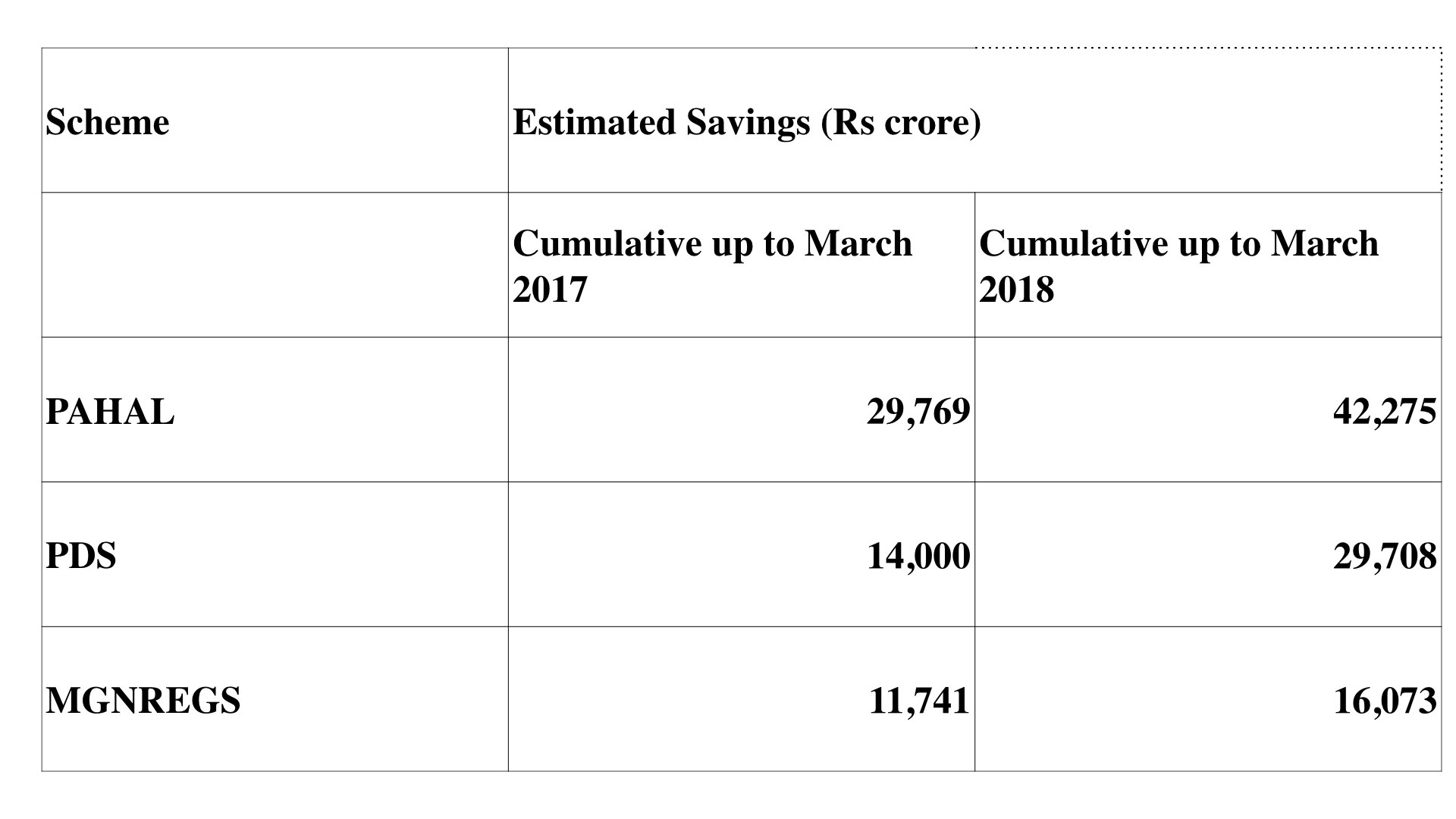 LPG subsidy: Before Aadhaar and DBT, each Indian household had the right to buy 12 subsidised cylinders per year at a price that was fixed by the government. Like other welfare schemes, the government would absorb the subsidy and pay the oil marketing companies.

After DBT, under the Pahal scheme, customers have to pay market-rate for the cylinders and the subsidy would instead be directly transferred to the beneficiary’s bank account.

Multiple independent analyses, including the CAG, have highlighted several problems with this estimate.These include problems with the way the government counted ‘inactive’ and blocked connections, over-estimating the effect of Aadhaar and problems with calculating exact subsidy prices.

The CAG audit of the PAHAL scheme critically noted that more than “90% of the decline in subsidies” could actually be accounted for by the fall in crude prices and “only Rs 1,763 crore out of the total reduction of Rs 23,316 crore was due to reduced offtake of cylinders by consumers”.

Separate research by academics like Rahul Lahoti also show that other factors, like no perceptible increase in sales to the commercial sector, raise questions over how much money has been saved through PAHAL and how effective the scheme has been.

PDS: The Modi government claims that it has deleted 2.75 crore “duplicate and fake/non-existent” ration cards as a result of DBT and Aadhaar. And, consequently, it has saved nearly Rs 30,000 crore from going to bogus beneficiaries.

As The Wire has extensively reported, organisations like the Satark Nagrik Sangathan (SNS), Delhi Rozi Roti Adhikar Abhiyan, Mazdoor Kisan Shakti Sangathan (MKSS) and the Right to Food Campaign have contested these figures, saying there is no publicly available data to support these conclusions.

Economists Reetika Khera and Jean Dreze believe that in states like Jharkhand, the large number of ration or job cards that have been deleted can be chalked up to other factors as well.

The most concerning factor is the fact that many genuine beneficiaries are being excluded from PDS benefits simply because they don’t have Aadhaar. On the government’s report card though, this would show up as savings.

MGNREGS: The Mahatma Gandhi National Rural Employment Guarantee Scheme is a ‘right-to-work’ programme that seeks to provide livelihood security in rural areas by providing wage-based employment (mostly unskilled manual work) for up to 100 days in a financial year.

The linkage of Aadhaar numbers with job cards was expected to curb criticism that poor oversight of the MGNREGS programme enabled ghost beneficiaries to thrive.

Like the issue of PDS savings, the Modi government offers no publicly available rationale or logic on how it calculates DBT savings for NREGA. (It is only in the PAHAL-LPG programme that it does, which is why that was audited by the CAG)

Economists like Khera and Dreze point to structural problems in the way the government counts fake job cards. For instance, RTI applications filed by Dreze note that “fake” and “duplicate” job cards actually accounted for less than 13% of all deletions in 2016-17, which at the time numbered 94 lakh.

Another independent analysis, by tech researcher Anand Venkatnarayanan, notes that actual gross savings generated by Aadhaar in NREGA from April 1, 2014 to March 31, 2016 was far less at Rs 30 crore.

While it’s hard for civil society and the academic community to come up with a statistic of their own on how much the Centre may have saved by deploying DBT methods, it is reasonably clear that Rs 90,000 crore is a gross over-estimate, even if one goes only by the problems in calculating LPG-Aadhaar savings.

In the past, the Modi government has also relied on the World Bank’s controversial statement that Aadhaar has the potential to help India save $11 billion in subsidies every year. This works out to nearly Rs 75,000 crore.

As The Wire has extensively analysed, the World Bank’s research too contains its share of flaws. Simply put, the primary research upon which its conclusion is based doesn’t support its overall thesis.

The prime minister and his senior ministers would do well to stop using the Rs 90,000 crore figure once and for all and instead focus their efforts on making the DBT and Aadhaar system work better.

Modi’s 10% upper caste quota is a political gamble that may...