A video clip of Rahul Gandhi’s speech during his visit to Dubai last week has gone viral. In the 10-second clip, Rahul Gandhi can be heard saying, “Mahatma Gandhi picked up the idea of non-violence from ancient Indian philosophy, from Islam.” The mention of Islam as a source of Mahatma Gandhi’s non-violence in the video has led to massive outrage on social media, especially among the right-wing social media users.

The founder of fake news website, Postcard News, who is followed by Prime Minister Narendra Modi, is among those who shared this video.

I requeste Dubai authorities please Give him best mental treatment in
ur country…..
We Will pay the bills with interest.

What is the truth?
The clip that is circulating on social media is a truncated version of a longer video. Alt News accessed the full video to get the full context of what Rahul Gandhi said:

“In an environment of violence, of anger, and you see it everywhere, you see it in United States, you see it in Europe, you see it in the Middle East. In an environment of anger, India has the answer. India has the blueprint to provide an answer, not just to India but to the entire planet. Non-violence is embedded inside our DNA. And it has been embedded not for 50 years. Mahatma Gandhi was a great exponent of non-violence. But Mahatma Gandhiji picked up the idea of non-violence from our great religions, from our great teachers. Mahatma Gandhi picked up the idea of non-violence from ancient Indian philosophy, from Islam, from Christianity, from Judaism, from every great religion where it is clearly written that violence will not help anyone achieve anything.”

The video of the relevant part of Rahul Gandhi’s speech can be seen in the video below starting at 23:37.

It is clear from the video that Rahul Gandhi was praising India when he said that the Indian philosophy of non-violence has a solution for the violence and anger plaguing the world. He said that non-violence was inspired by every great religion of the world. At no point did he single out any one religion as suggested by the clipped video and the accompanying commentary on social media.

Alt News has reported multiple instances of misinformation where there is an attempt to portray political parties/individuals who are in opposition to Bharatiya Janata Party as favouring Islam as a religion, and thereby anti-Hindu. A recent misleading video claimed that Rahul Gandhi had converted to Islam after the assembly polls. Another clipped video was circulated to claim that student leader Kanhaiya Kumar had asked people to convert to Islam . Tarek Fatah had circulated a photoshopped image claiming to be that of a madrasa teacher portraying Islam as superior to Hinduism. Fatah had also circulated a fake story claiming Muslims waved Pakistani flags to celebrate the victory of Congress.

Others who shared this information 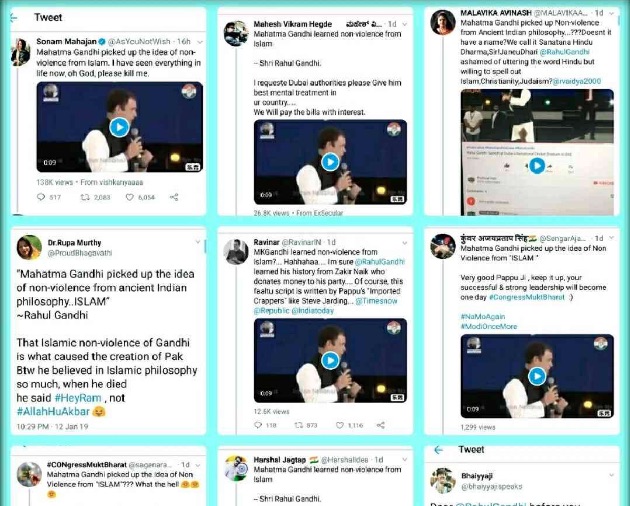 Several other tweets from right-wing handles convey that Rahul Gandhi had singled out Islam as the inspiration behind Mahatma Gandhi’s philosophy of non-violence.

This article first appeared on AltNews.